Located just over an hours train ride from Paris, Rouen, the capital of Normandy, makes it a wonderfully exciting day out at any time of year.

Running along the river Seine, Rouen is like mini Paris. It has it all, the culture, the cuisine, and the charm but without the tourist hordes and rude waiters.

Visit the cathedral that Claude Monet was obsessed with painting. Stand on the spot where Joan of Arc met a sticky end.

Disclaimer: This article contains affiliate links, we may receive a small commission for any purchases at no extra cost to you. Lovely.

Top 11 Things to do in Rouen in One Day

The great thing about Rouen is that nothing is too far apart (except the Jardines de Plantes) making the city very walkable.

But if you feel like you are getting worn out from sightseeing, the place is abundant with great places to stop for food, coffee, and patisserie.

1. Check Out the Joan of Arc Tower 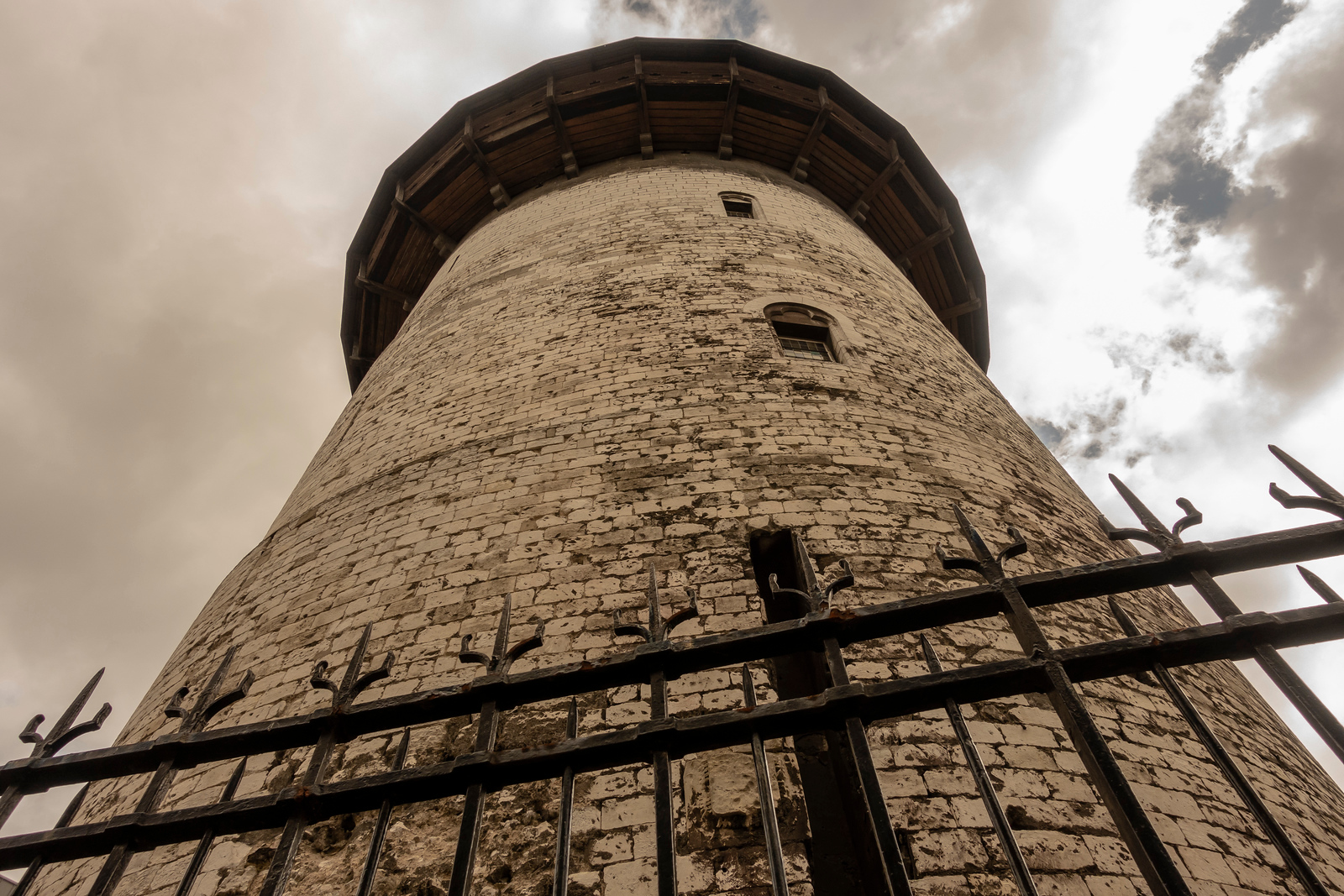 It’s the only remaining fragment of the medieval Rouen castle where Joan of Arc was kept prisoner before her terrible fate in 1430. At the age of 19, she was burned at the stake for heresy in the city of Rouen.

Today, as a French heroine, her legacy is felt across the city. There’s not one but two monuments to honour her that we’ve listed in this guide.

The tower stands on the left-hand side between the station and the Musée des Beaux-Arts de Rouen.

There’s a small exhibition about Joan of Arc and the castle at the tower which you can access via the rue du Bouvreuil.

Next on the list is the quirkiest site in Rouen. 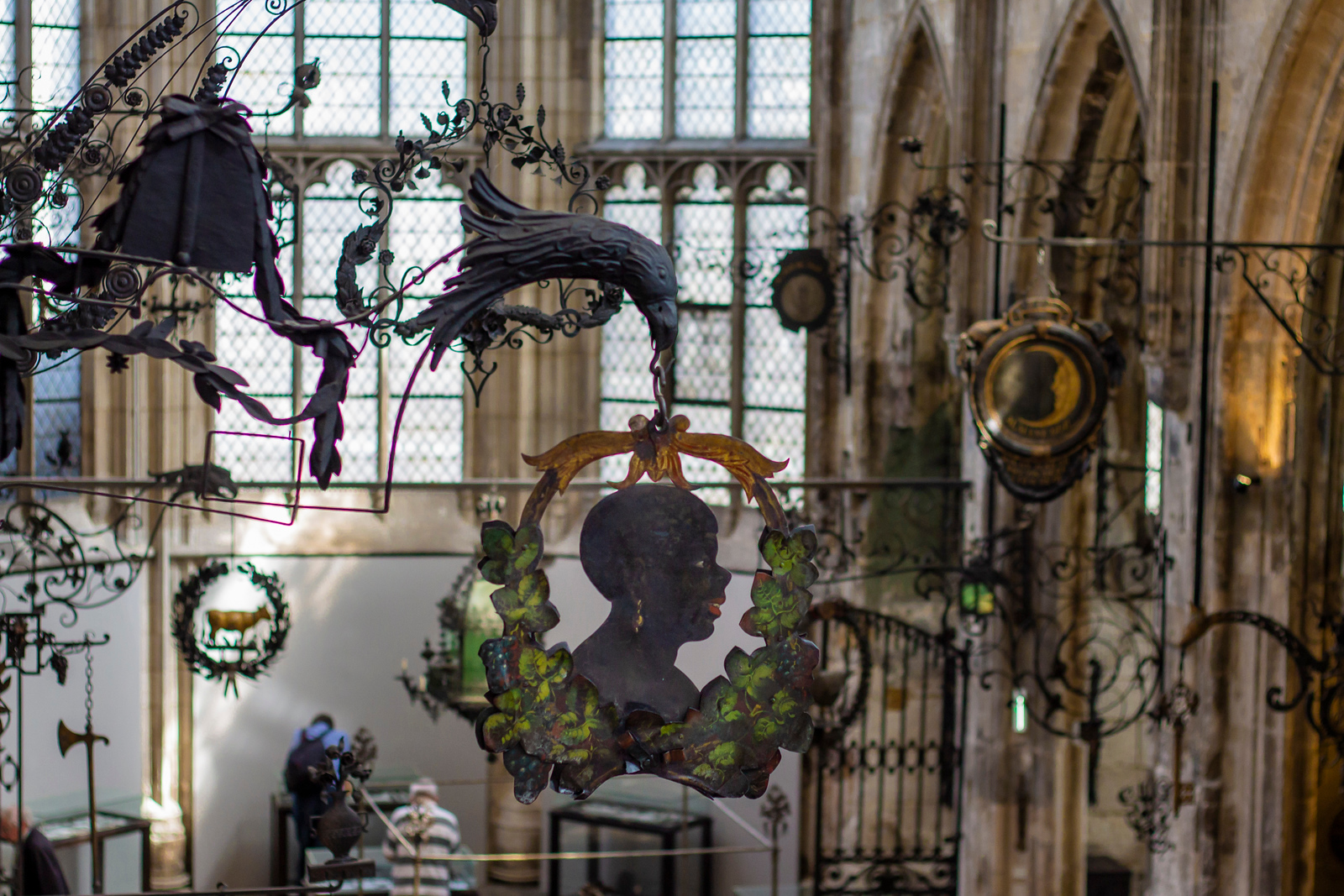 Imagine a ruined 15th-century church full of wrought iron, a striking collection of 14,000 beautifully displayed pieces from all over Europe.

That’s the Musée Le Secq des Tournelles – one of the most unusual things to see in Rouen. And a favourite of ours.

As you walk inside the Gothic-style church of Saint-Laurent, you are instantly hit with an abundance of iron artwork.

There are cool iron shop signs hanging from the walls and a spiral staircase in the corner. The glass cabinets across the two floors contain beautifully crafted decor pieces, locks, sewing tools and other decorative objects.

Even if you aren’t into iron, it’s such a fun space to explore and great for photos. The combination of the light coming through the tall church windows and the LED lamps land a somewhat alien ambience.

The start of this iron art collection dates back to 1865. Jean-Louis-Henri Le Secq Destournelles, a French photographer took interest in wrought iron art while taking photos of various monuments for assignments.

Later on, his son donated the entire collection to the city of Rouen.

The fact that the museum is housed in a church adds so much drama to this historic collection. Plus, it’s free to enter and sits next door to Musée des Beaux-Arts de Rouen and the main train station.

You don’t have to be an art expert to appreciate masterpieces by Monet and other painters from the 16th-20th Century. And since it’s France, it’s only appropriate to indulge in cultural attractions.

Founded in 1801 by Napoleon I, the fine arts museum is one of the most visited fine arts museums in the country. The 63 spacious rooms here display a permanent collection with occasional temporary works from various artists.

From sophisticated fine arts to a gloomy past, the city doesn’t fail to impress (or spook). From all the things to do in Rouen, this next one is surely the grimmest? 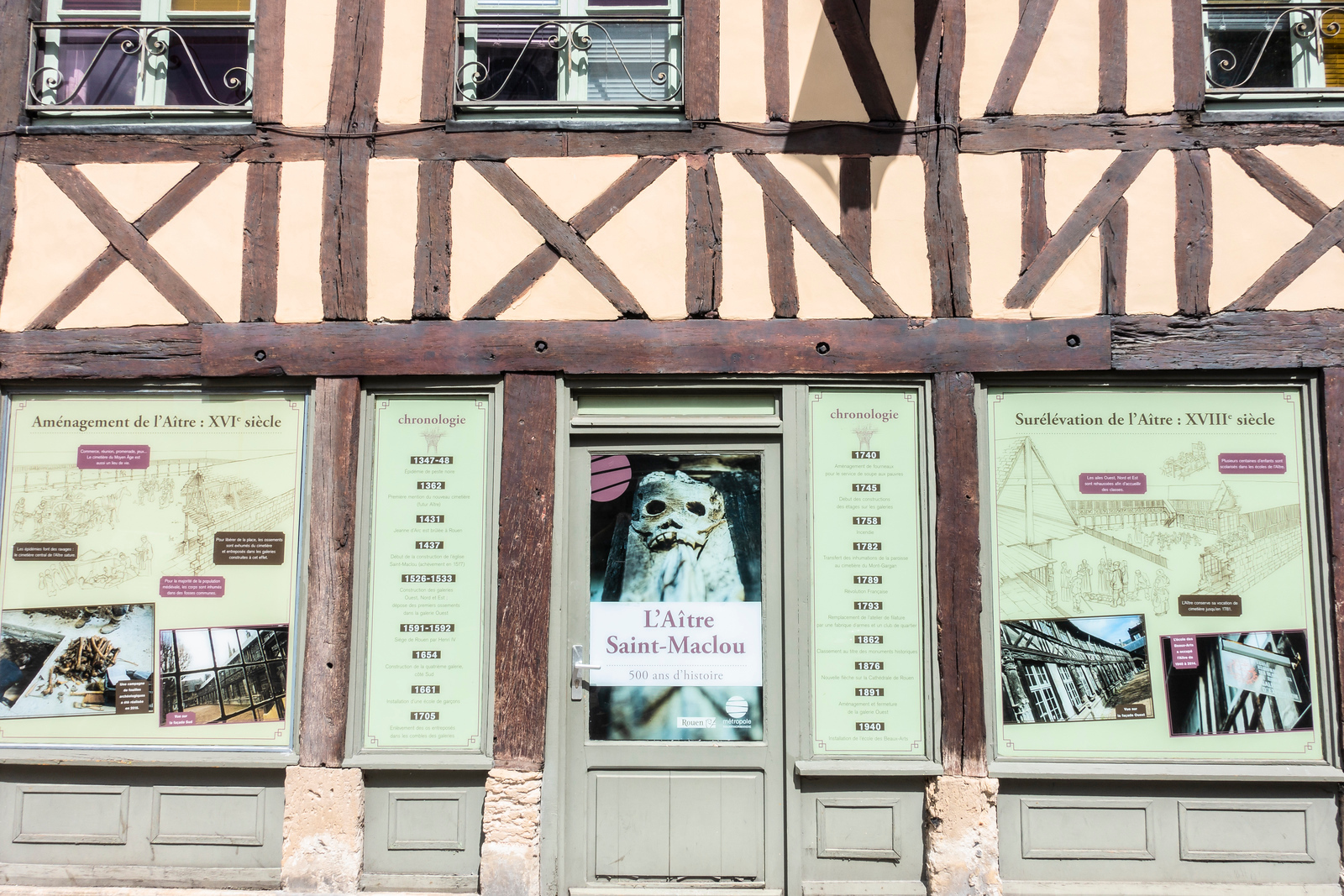 If you are craving more unusual things to do in Rouen, look out for Aître St-Maclou on Rue Martainville just past the grand Saint-Maclou church.

It’s a mass grave of the victims of the Great Plaque dating back to 1348 and one of the last examples of a medieval plague cemetery.

As you step into the dead-peaceful courtyard, you’ll find yourself encircled by the romanesque half-timbered buildings.

With sculls carved into the walls by the gravediggers, the place is a hidden spooky gem in Rouen.

5. Admire the Ornate Church of Saint-Maclou

The striking Roman Catholic church perched right in the heart of the old town is hard to miss on your day trip to Rouen.

Buzzing with touristy cafes, the Place Barthélémy offers a fantastic view of the Church of Saint-Maclou. It’s said to be one of the best examples of French Gothic architecture so get your wide-angle lens ready.

Surrounded by beautiful half-timber Norman-style buildings, the sheer size of it makes it hard to take a clean shot of the currently restored facade.

Dedicated to Saint-Maclou, one of the founder saints of Brittany, it has a lengthy history. It was used as a weapon factory during the French Revolution and reopened as a church again in 1802.

Musée Flaubert d’Histoire de la Médecine is a site that could pique your interest if you love discovering quirky sites on your travels.

The museum is the birthplace of the French novelist, Gustave Flaubert. It’s also a former hospital where his father worked as a surgeon.

Therefore, the museum is a mix of literature and 18th and 19th Century medical facility. It houses a reconstructed old-type pharmacy, dental surgery, and a herb garden.

It’s also full of strange and gruesome medical equipment, patient beds, and an 18th Century female dummy depicting the birth process. It was used to educate midwives of the possible complications during the childbirth at the time.

To find the spot where Joan of Arc was burned at the stake, head to the Place du Vieux Marché. Here you’ll find the modern church of St. Joan of Arc.

Look out for a statue on your left-hand side just before entering this modern church. It marks the exact spot of the ruthless execution of 19-year-old Joan.

The church itself is an interesting structure in the capital of Normandy. It can look a little odd from a distance. But that’s because it’s built in the shape of an upturned boat, a traditional look of old Norman churches apparently.

Inside you’ll find impressive stained glass windows depicting scenes from the Bible. The glass has been borrowed from the old church of St. Vincent, destroyed in 1944.

On a more cheerful note, the square is also home to France’s oldest restaurant, La Couronne. It’s the place where Julia Childs, an American chef, first fell in love with French cuisine. 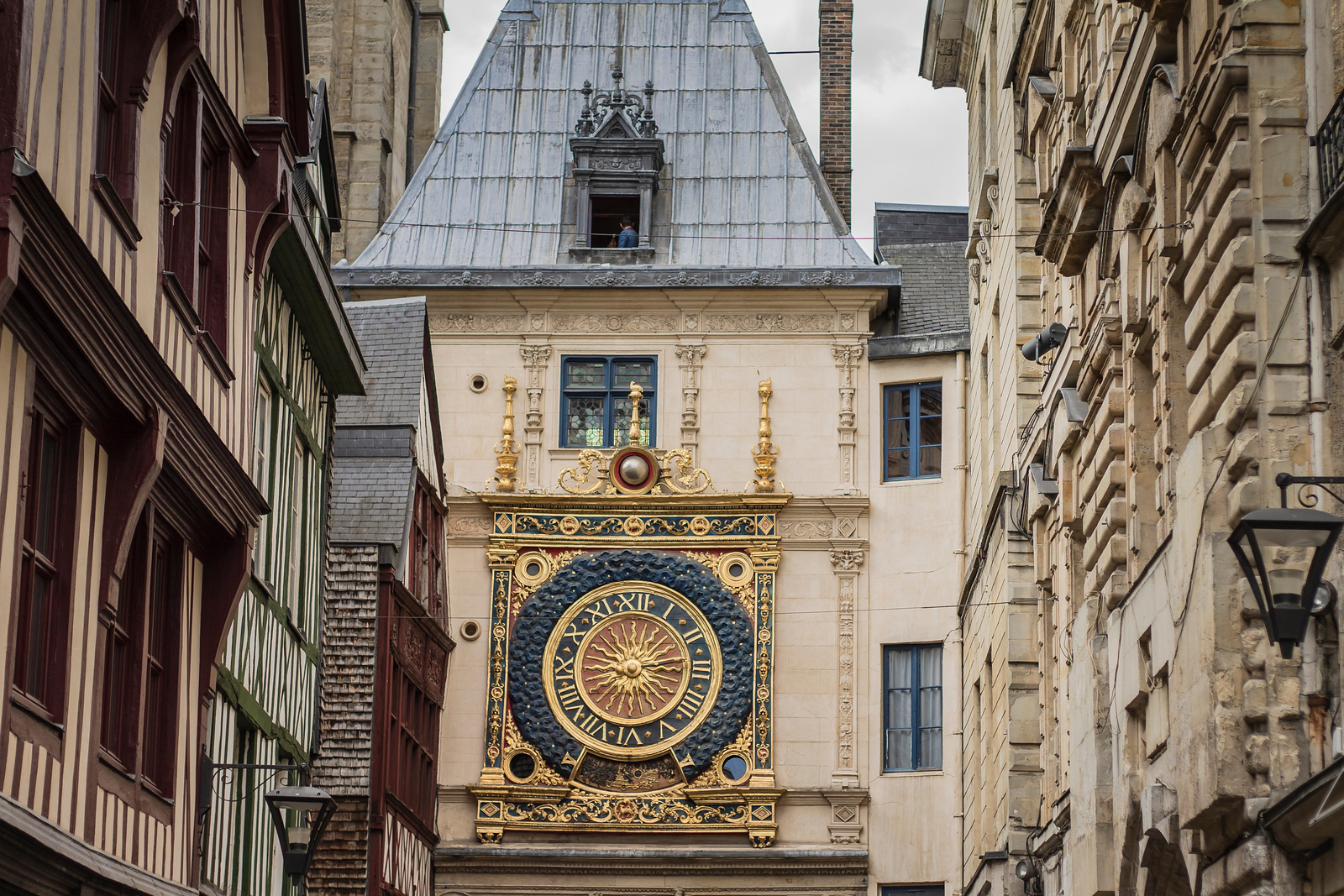 Rue du Gros-Horloge is a busy spot. As well as being a shopping street, it houses the impressive Gros Horloge, the 14th-century astronomical clock.

Made in 1389 it is one of the oldest working clock mechanisms in France and across Europe.

If you have time, pop into the belfry and explore the dial room and the clock itself. From here you can enjoy lovely panoramic views across the medieval city of Rouen.

The Renesanse clock that’s installed in an arch above the buzzing street is full of symbolism. Details such as starry night and moon phases adorn the clock whereas sheep signify the importance of wool production to the cities wealth and prosperity.

Next on the list, just past the clock is the majestic Gothic church that inspired Monet’s series of paintings in the 1890s. But it’s not just another church in Rouen, it has something quirky inside that you’ve got to discover… 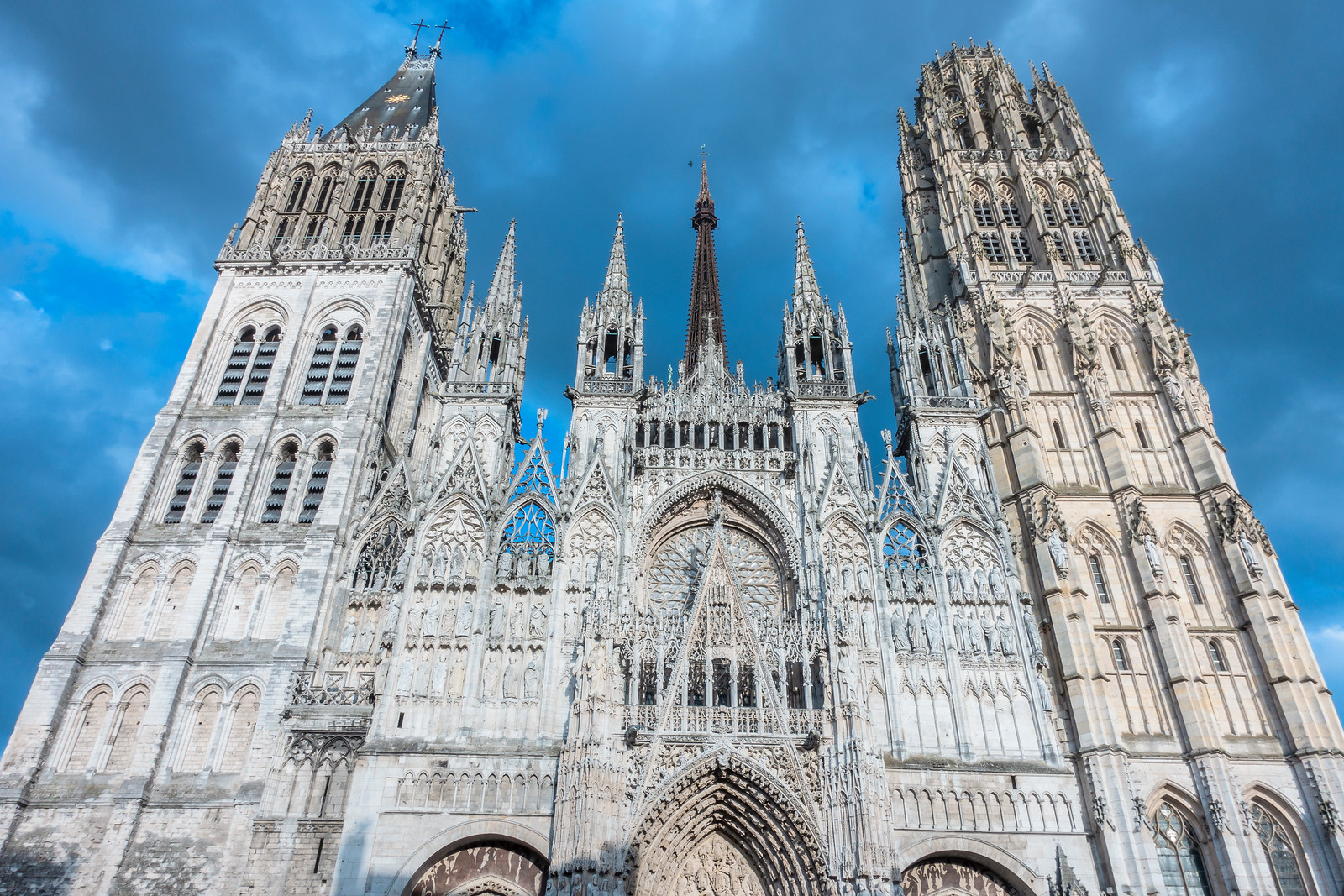 When wandering around the Notre-Dame de Rouen, look out for King Richard the Lionheart’s sarcophagus.

When the brave King died in 1199, his heart was removed, embalmed and buried at Notre-Dame of Rouen, separate to his body. Such ritual was common in the Middle Ages we’re told.

During an excavation in 1838, his heart was found in a small lead box under the funerary effigy.

Although many believe that King Richard I was killed with a poisoned arrow, the heart was decomposed too badly to determine the exact cause of King’s death. The research though did reveal some fascinating facts.

His heart was embalmed using spices and plants, such as frankincense. It was then was wrapped in a linen cloth soaked in myrtle, daisy, and mint. This symbolic process was said to be used for the embalmment of Jesus Christ.

Mercury was also used to stop the heart from decomposing but that didn’t quite last 800 plus years.

When you are done admiring this mighty Gothic masterpiece, relax on one of the giant seats outside, just in front of the cathedral. They are surprisingly comfortable and offer a great view of Notre-Dame de Rouen soaring to the sky.

Out of all the things to do in Rouen, visiting Jardines de Plantes takes a little bit of effort. That is, if you decide to walk, like us.

If you are feeling adventurous on your day out in Rouen, then venture to the south Rouen – it’s around 3km away from the old town.

As soon as you cross the bridge, you’ll see a completely different face of the city. The streets, a little less picturesque, are buzzing with local crowds. And so is the garden.

Dating back to 1691, we felt like the garden was a little off the beaten path; mostly families and locals enjoying the peaceful surroundings.

Having had many owners – Napoleon being one of them – Jardines de Plantes houses an impressive collection of the plant species from all over the world.

There’s a snack bar in the park with a carousel ride for children, but bring a packed picnic if you are heading there for a relaxing lunch. There’s a lovely shaded promenade lined with benches to chill out.

11. Walk the Banks of the Seine

Our final thing to do in Rouen is simply to enjoy a walk along the river; just like Paris, Rouen is divided by the river Seine. Known as the right and the left banks, both sides have something to offer.

The right bank is frequented by the local crowds and houses the Maritime Museum and Panorama XXL, a huge tube-looking building housing contemporary art installations.

The left bank is great for picnics within its green spaces and also houses Le 106, a waterfront music arena.

Whichever side you choose, you can access it easily thanks to the many bridges connecting both sides of the city.

Paris to Rouen – How to Get There by Train 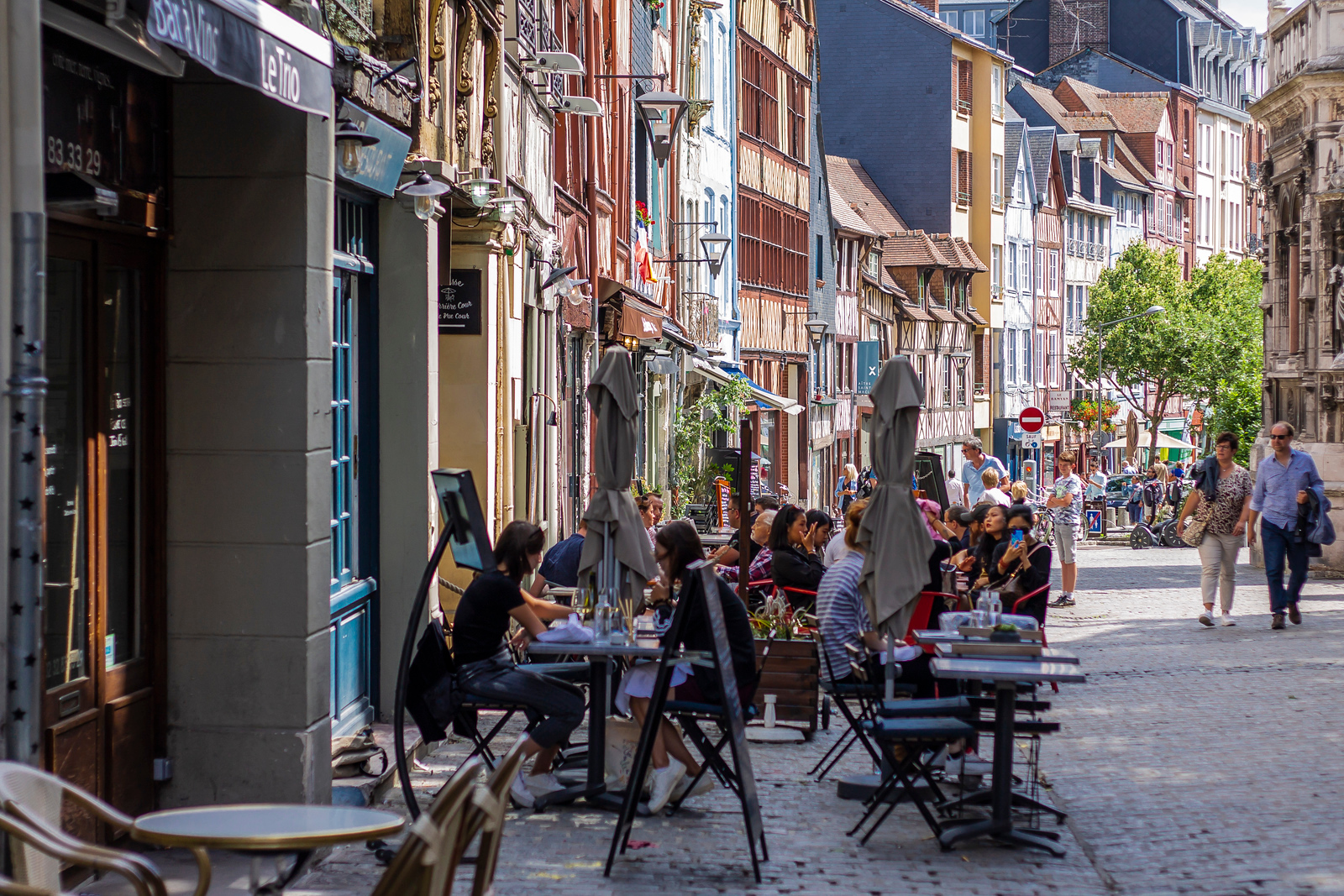 Getting to Rouen from Paris is easy.

You can catch a train to Rouen from Gare Saint Lazare station in Paris. Trains run frequently throughout the day and take just over an hour to get to Gare de Rouen-Rive-Droite, Rouen’s main train station.

The easiest way to buy tickets for Rouen is to download a train booking app for your mobile from oui.sncf.

Once you’ve downloaded the app, you’ll be able to book your tickets and save them as m-tickets. No need to print or collect.

Purchasing tickets at the station can be more expensive and even triple the price when buying on the train.

Getting to Rouen from Paris by road takes a little longer, just under 2 hours depending on the traffic.

But since Rouen is so easily walkable we recommend catching a train and exploring the city on foot. That’s what we did.

What are the other things to do in Rouen that we’ve missed? Let us know in the comments below.